This post started out with one, simple thing as its subject, but it has now evolved into three posts, after I organized all my thoughts. It will all make sense by the end of next week with a new giveaway. I promise!

Today, we’re looking at one of the most popular home manufacturers of the 20th century: Sears. (Before your mind goes there, I’m not giving away a house next week.)

You know I love a good house plan (you can read more about that here and here), so I had to share this great treasure trove of history and design. Isn’t it interesting to see how previous Americans chose to live? Wait until you see how they got these homes…

Sears & Roebuck Co. began selling building supplies in the 1895 edition of their famous mail-order catalog. It was a failure. Sears was considering closing down the building supplies division in 1906 when a new manager, Frank W. Kushel, decided to offer the supplies shipped directly from the factory. This eliminated all of the storage costs for Sears.

(Side note: Frank Kushel came to the building supplies division from managing the china department of Sears, proving the old adage that a good salesman can sell anything.)

This book contained 22 house plans, which the customer could choose from and order directly from Sears. These were very flexible designs that often can with several floor plan options that could be modified to suit the owner’s tastes and needs.

Most of the building materials were included in the price of the home: lumber, windows, hardware, etc. Masonry, due to weight, had to be bought near the house’s building location. Plumbing and electrical kits were sold separately, in part because some homes were often built beyond the local municipal reaches of electricity, sewage, etc. Each house also came with a detailed construction manual, which can in very handy because…you had to build the house yourself. 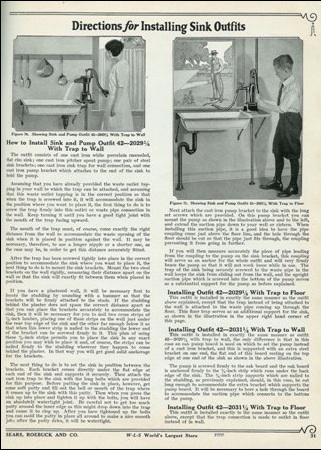 What made these houses so affordable, and therefore popular, is that they eliminated the labor costs of professional builders. Your house would arrive 30,000 pieces on two railroad boxcars. You built the house yourself, on your lot, on your schedule, using the included tools and directions from the construction manual. The manual even came with a prominent fore-warning: “Do not take anyone’s advice as to how this building should be assembled.” Talk about “sweat equity”, right?

Sears also sold out buildings, such as garages, barns, out houses, etc. Due to the municipal plumbing issues I mentioned above, out houses were sold well in the ’30’s. Over the years, Sears also featured building innovations in their house plans as they came on the market, such as drywall, plumbing upgrades and asphalt roofing shingles.

While Sears didn’t invent the mail-order house, they were the largest American retailer of the concept. In the years that Sears sold home kits, between 1908 and 1940, an estimated 100,000 houses were ordered by mail. Standard Oil even built a company town in Illinois using over 190 Sears houses. Many of these homes still survive all over America today. 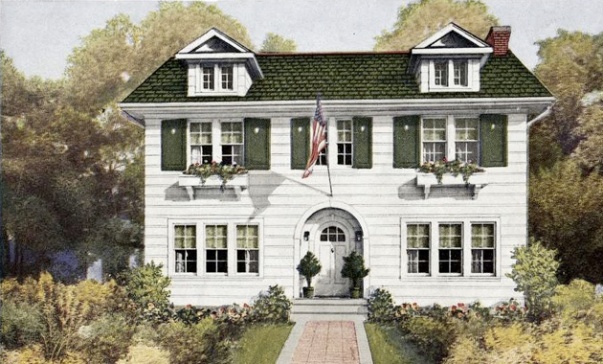 Sears offered 3 grades of houses. These grades accommodated budgets and regional house uses ever further than floor plan adaptations. However, this does not mean the lower grade houses were less sturdy, just that they used different materials.

The first grade of house was known as “Simplex” or “Econo-Bilt”. These buildings were often smaller, with less daily use, like vacation cottages and hunting cabins. Here’s an example of one as it appeared in the catalog:

Notice anything missing from that house plan? You would eventually. Remember, out houses are sold separately…

See how the Hall and the Kitchen can be opened on two sides to allow breezes to cool the rooms? Also, the bathroom is off of the porch only, which is not ideal for a Midwestern Winter. Love the porch on this house, though.

The last and most expensive house grade was the “Honor Bilt” house. Enticing name, huh? Clever marketers at work. These houses used the highest grade lumber and ALL of its pieces arrived for construction pre-cut and pre-fitted. They tended to have much more variety in architectural style. Some of these homes had some quite large floor plan options for the day, too. Here’s an example: 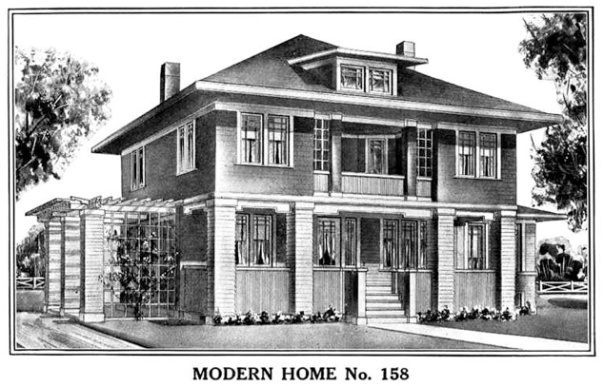 These “Honor Bilt” houses were very popular. They are often identified today by their wood shingle siding, which was a very popular option in an already well established architectural style of the day.

I also wanted to give you a small sampling of the many architectural styles Sears offered in their houses. (I’ve linked the location of all the houses and their plans in paragraph that follows these images.) 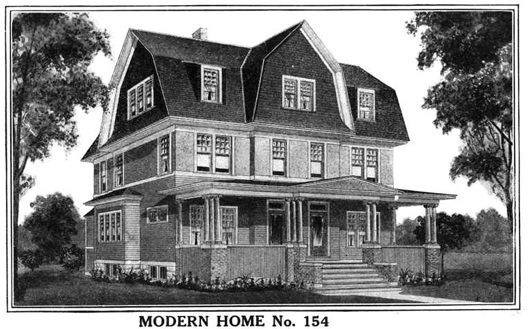 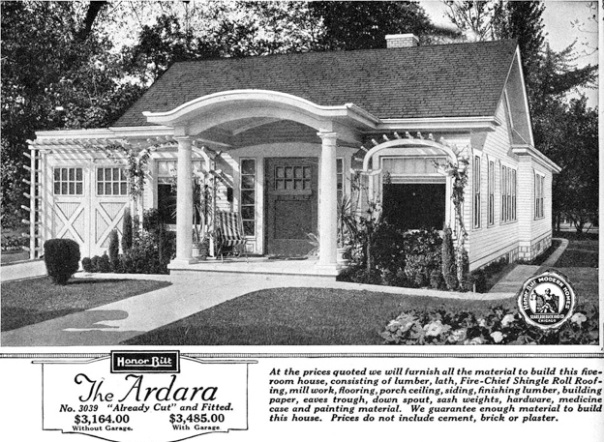 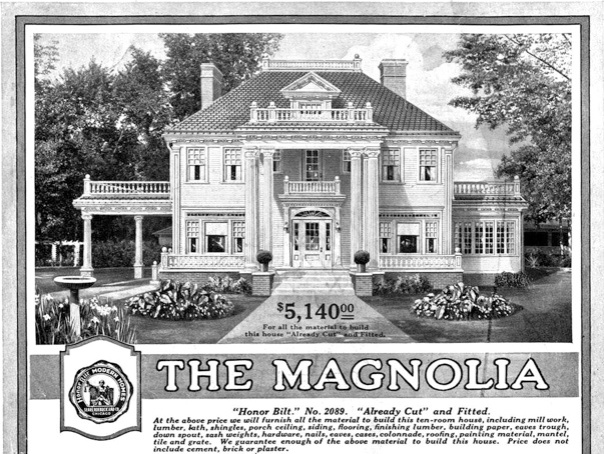 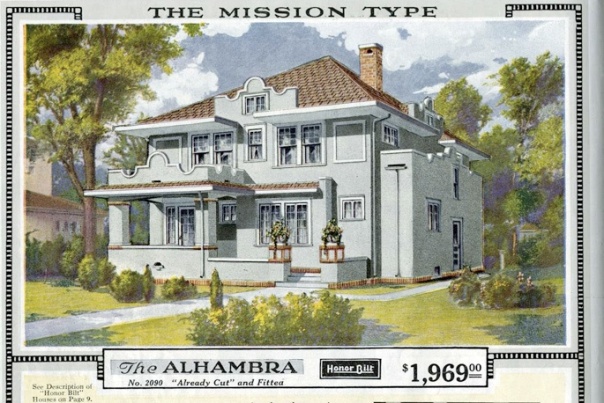 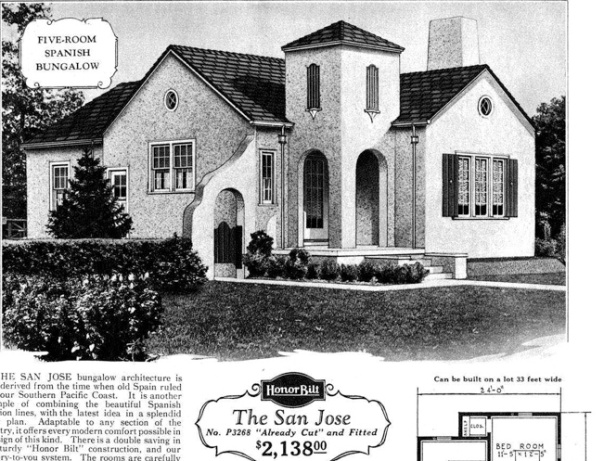 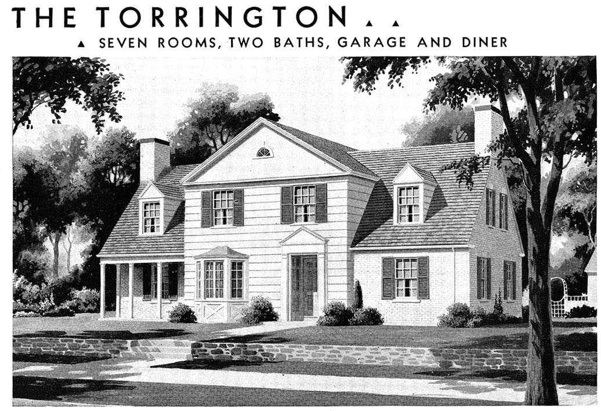 See a house you love? Except where otherwise noted, all of the pictures in today’s post are courtesy of the Sears archive website about Sears houses. They have dozens of other house pictures with plans to drool over in their image section. You can explore them all right here.

Do any of you live in or near a Sears house? Do you like floor plans from older house designs or do you prefer a more modern layout? What is the largest thing you have ever bought from a catalog? Leave a comment and share your experiences!