I have always thought today’s vocabulary word sounds like an old-fashioned soda or confection. Something someone could have ordered at the fountain or candy counter at a General Store in the very early 1900’s. Another, older and now much less used, variation of this term is “barley sugar twist”, which sounds even sweeter. But, in fact, this is what it looks like: 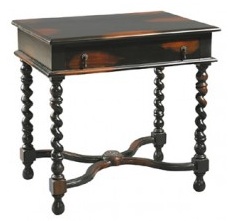 See the twisted legs? Those are “barley twist” legs. This style dates back hundreds of years. It actually takes its shape from the architectural term referred to as a “Solomonic column”. The “Solomon” in that term comes from the belief that helix shaped columns…

…were used as structural pillars for the roof of Solomon’s Temple, of Bible fame. Of course, that was believed to have been built a long time ago, circa 600 BCE, so we have to rely on the oral history. Nevertheless you can still find Solomonic columns in architecture today. Here’s one of the most famous examples:

Beautiful, huh? Look at how large it is compared to the people in the bottom left of the picture. This canopy is made of carved bronze and sits over the high altar in St. Peter’s Basilica in the Vatican.  This is Bernini’s design of St. Peter’s baldacchino (pronounced “bowel-da-KEEN-oh”, which is Italian for a form of canopy.) That’s hand carved bronze. my friends. No machines to help built this back in the 1700’s.

In fact, all of the early barley twist furniture was hand carved, too. It was generally  used as a form of support in a larger piece of furniture, like the table I showed you above or this reproduction chair:

I’ve always admired the meticulous measuring skills that must have gone into making the curves so evenly spaced. That must have taken such planning and patience to plan out before the carving even began. As soon as mechanical woodworking tools started to be developed a couple of centuries ago, a technique was developed to turn pieces of wood on a lathe and carve the curves in as the wood turned. Here is a working lathe with a craftsmen putting a barley twist pattern onto a lathe, to show you what I mean: 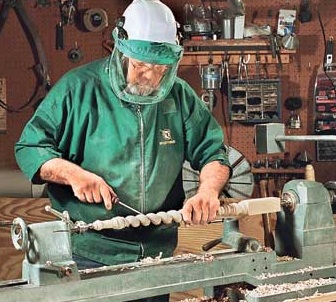 The barley twist pattern was very popular in English furniture design and had many revivals, including the early 1800’s and then again throughout Queen Victoria’s reign in the mid to late 19th century. Because the British Empire was stretched across the globe, many of its ideas for fashionable furniture design travelled, too.

Before long, people were using the barley twist as an ornamental feature, instead of a structural one. You can see how the detailing of all those curves gives this mirror an extra sense of layered opulence:

Here’s an example applied to a modern crafted desk, designed to look like a heavy antique: 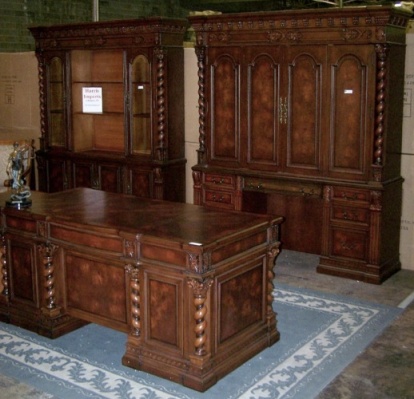 And my personal favorite, a bed where the barley twist columns themselves are the show-stopping, non-structural, ornamentation:

There is also a variation of this term called “open barley twist”, with “open” meaning “hollow”. In older pieces this was very uncommon, because it took away the strength that made the column structural in the first place. You generally only saw open barley twist appear in small items, like these brass candlesticks: 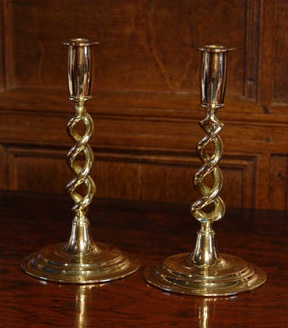 I chose this term for our Design Vocabulary today because I’ve noticed a rising popularity of this form in recent months. I first saw barley twists showing up in all sorts of designer table lamps, like this lovely floor lamp:

Do you like the simple curved shape? I think this can work with almost any style preference, from modern to period-accurate antiques. You can find barley twist popping in materials beyond furniture, too, such as this lovely retro print by designer Robert Kime:

Can you see the elegant barley twist in the pattern? Most people wouldn’t even know where the pattern name comes from, but now you do!

And remember how I explained that the open barley twist form was generally only used for smaller items, because of structural integrity issues? Well, an American designer decided that seemed like a good challenge. When I saw this table recently…my jaw actually dropped: 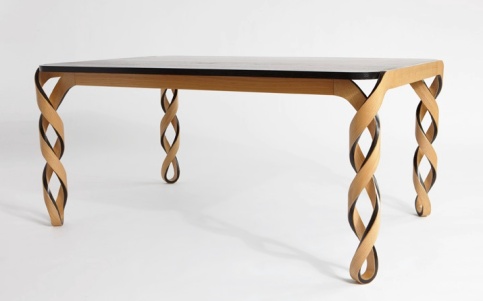 How gorgeous is that?! Wait, here’s a close up of the legs and delicate corners:

It’s not delicate in strength, though. Here’s the proof:

That table would make me throw out my tablecloths forever!

So now you can spot a barley twist, in all it’s varieties. Have you seen one in a store lately and not realized it has a name? Do you have an old piece of family furniture with barley twist legs? What other design terms have you always wanted to know the meaning of? Leave your thoughts in a comment and you may see your ideas in an upcoming Design Vocabulary post!

Posted on May 9, 2012, in Uncategorized. Bookmark the permalink. 4 Comments.